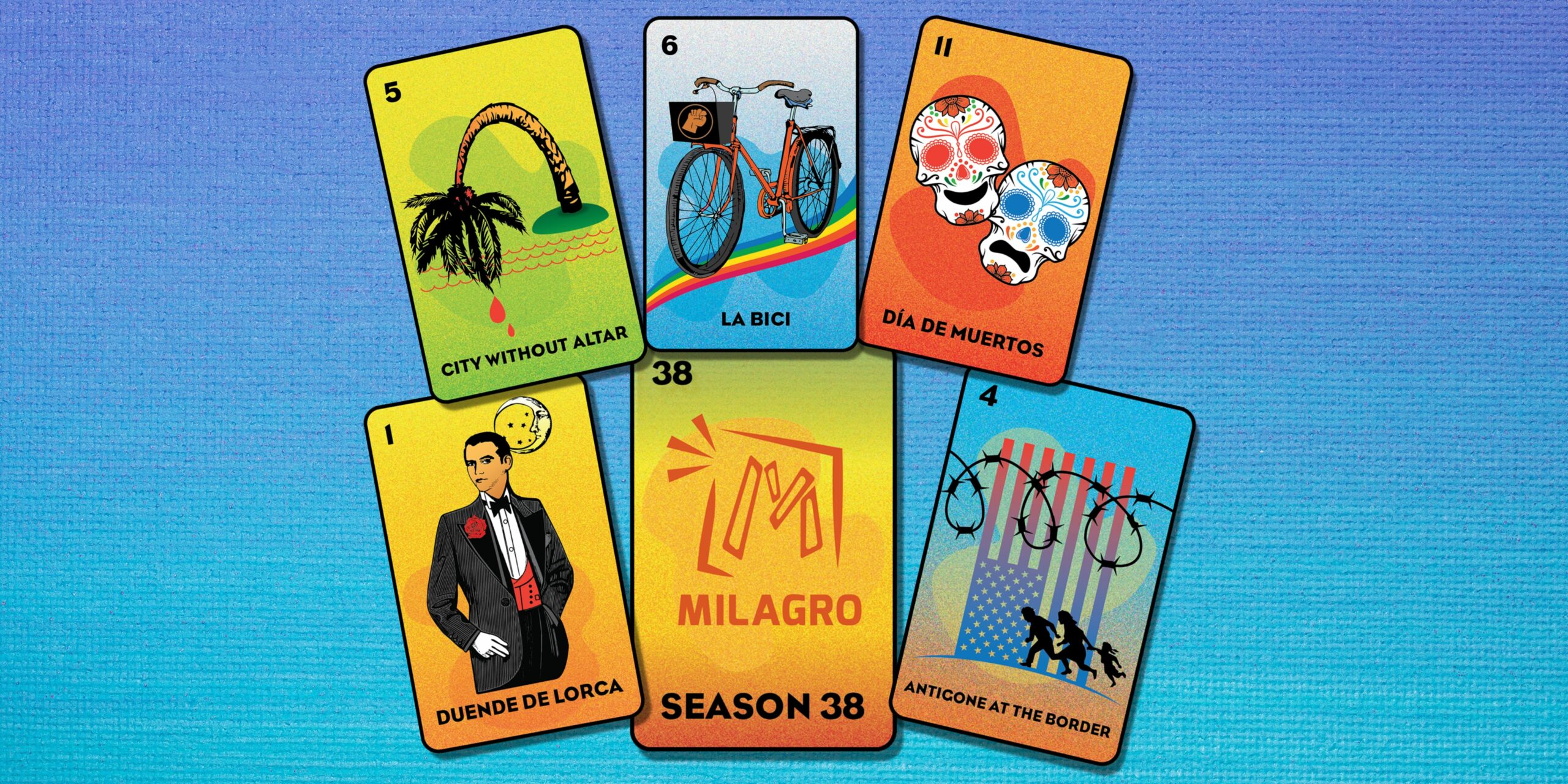 A creative exploration of being human

The Milagro familia is glad to be back with Season 38: renaissance en verso. The darkness of the pandemic is slowly starting to recede, and like the light at the end of the tunnel, we see the prospect of a new tomorrow, revealing a brighter path than the one we’ve traveled so far. Milagro’s season will apply a fresh approach to storytelling, the espectáculo, an exciting matrix of creative engagement events- conversations, exhibitions, performances, workshops, and more – that delve into and surround the theatrical centerpieces.

Season 38 launches with Teatro Milagro’s community art project, La Bici, an episodic video play that brings together ideas of bike safety and how it relates to art and the community. The episodes focus on the titular main character, La Bici, a repurposed city bike, who rides in and out of stories, songs, and skits that connects and educates the community. Presented in collaboration with the Central Eastside Industrial Council and Friends of Green Loop. Episodes will also coincide with community bike rides and bike safety seminars, allowing the community to engage and become a part of the project.

This year, Portland’s oldest celebration of the Día de Muertos (Day of the Dead) will explore the mystery of rebirth and renewal. We welcome and celebrate those who have passed before us, honoring their memory with laughter and tears. Milagro’s espectáculo will feature a Día de Muertos documentary recounting Milagro’s 25 year history of original programming, a community altar dedicated to Covid-19 victims,  poetry readings and other creative engagement events.

Starting off 2022, Milagro will premiere Duende de Lorca by Dañel Malán, a play that recognizes the life of Spanish poet, playwright, and theatre director, Frederico García Lorca, and how his travels shaped his artistic nature. Conversations supplementing this program will center around LGBTQ topics, representing the flamenco dance style, and offering community readings by the works of Lorca.

Antigone At The Border

When presenting the world premiere of Antigone At The Border by Marc Pinate, an adaptation of Sophocles’ Antigone, set in the modern day U.S.-Mexico border, Milagro will host an espectáculo of conversations and events that will coincide with the production regarding immigration. We will be also holding community discussions and panels that will center around how immigrant communities can be tied to conversations of racism and bias.

As we bring our season to a close, Milagro is proud to produce in collaboration with Teatro Luna West and Urban Theater Company, a production of a new play by Dominican-American playwright, Jasminne Mendez, City Without Altar, a two-act play in verse that seeks to amplify the voices and experiences of victims, survivors and living ancestors of the 1937 Haitian Massacre that occurred along the northwest Dominican/Haitian border during the Trujillo Era. Milagro is proud to execute panels and workshops centered around anti-blackness, colorism, and how to combat these topics with art exhibitions and community engagements that enable conversations between community members from a plethora of backgrounds.

In addition to our new programming for the season, Milagro will also proudly present virtual tours of the productions ¡HUELGA!, a play centered on the National Farmworkers Association’s co-founder and activist Dolores Huerta, and Blast Off!, a play focused on Ellen Ochoa, the first Latina astronaut. Both of these educational productions will be touring virtually, provided by study guides and interactive workshops for educators and students.