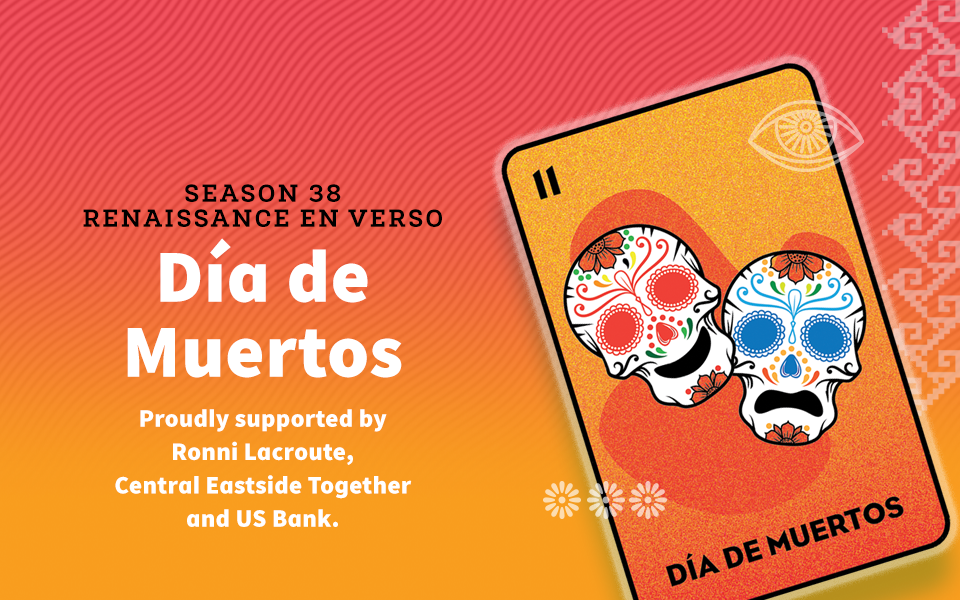 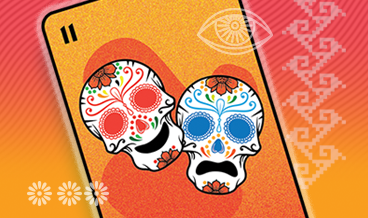 Día de Muertos is a time of joyous reunión! We welcome and celebrate those who have passed before us, and honor their memory with laughter and tears.
In Season38, Milagro will explore the topic of rebirth and renewal, commemorated with altars, crafts workshops, concerts, poetry readings, a Día de Muertos documentary, and showings of Muertos productions of the past. 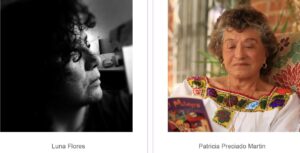 Milagro is honored to be partnering with Borderlands Theatre Artistic Director, Marc David Pinate, to present Ofrendas Poeticas. Poets and storytellers Luna Flores and Patricia Preciado Martin share words, prayers, and stories reflecting the season of honoring the dead, harvesting our blessings, and celebrating the gift of life. A livestreamed literary event hosted by Borderlands Theater artistic director, Marc David Pinate, with the cumbia-fusion sounds of the Sonoran desert by DJ Dirtyverbs. Special thanks to the Arizona Commission on the Arts. 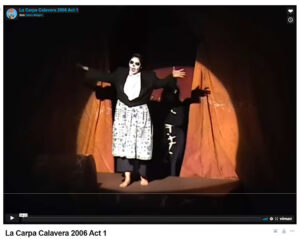 Since December of 2020, when we had to cancel our Día de Muertos production due to Covid-19 concerns, Milagro has been working behind the scenes to create a documentary of its 25 years of Día de Muertos original programming. Beginning from the first Día de Muertos Festival in 1995 to the 2019 production of Amor Añejo, Milagro has presented an extraordinary compilation of devised work celebrating this time honored period. Led by cinematographer Tania Dominguez-Rangel and narrated by Enrique Andrade, the Muertos documentary will journey through time, accompanied by imagery from Milagro’s archives as well as interviews with directors and performers. 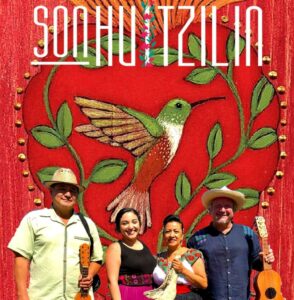 Son Huitzilín plays a blend of music influenced by sones of Mexico using traditional and original instruments. Sherman Floyd shares this inspiration about his group, “We’ve been playing with the mission to bring Son Afro-Mestizo to communities in Oregon. We hope to keep this music alive while also continuing to explore our own sound.”
Son Huitzilín has performed on the stages of Cinco de Mayo in Portland, the Mexican Fiesta in Woodburn, El Grito PDX, Muertos NW, community events in Woodburn, Portland Parks “Movies in the Parks”, the State Fair in Salem, and of course Milagro. 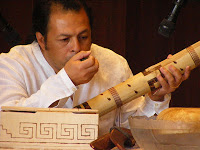 Gerardo Calderon is a composer, producer and multi-instrumentalist. Born in Mexico City. He grew up surrounded by music, dance and culture. While living in Mexico, Gerardo studied classical guitar at the Escuela Superior de Música in Mexico City. He also studied music theory at the Portland Community College in Oregon, and later he studied Music Therapy for three years at Marylhurst University.
Gerardo is the musical director of Grupo Condor and Nuestro Canto, and has pursued his interest in traditional Mexican music, Latin American folk music and Pre-Colombian music. Gerardo has performed with folk ensembles in Mexico, Canada, New England, and the Pacific Northwest, and he has also toured with choir and world music ensembles throughout the USA and Europe. He has composed music and designed sound for Ballet companies, documentaries, short films, commercials, theater companies, and cultural organizations. Gerardo has been a teaching artist for 27 years and has continuously served the northwest community through “Young Audiences of Oregon and SW Washington,” “Multnomah County Library System,” and other cultural organizations. For the last 8 years Gerardo has been playing therapeutic music for Elder Facilities, from Retirement Center to Intensive care facilities. Gerardo had the honor to be part of the Circus Project company, as Musical Director. As a parallel activity to performance, teaching and studying; Gerardo is an instrument artisan; he makes custom pan flutes, rain-sticks, water drums, turtle boxes and bombos (bass drum).
Gerardo plays his own instrumental compositions, where he blends Latin America folk rhythms, Jazz and contemporary rhythms from the Americas, he also combines different instruments from Latin America, such as string instruments, wind instruments and percussion instruments, creating a unique musical sound.  Learn more about Gerardo’s work on his website at https://www.gcgartsproduction.com/ 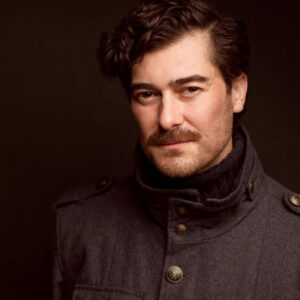 Joaquin Lopez is the oldest son of the Lopez Family; the Lopez family who brings us one of Portland’s popular standbys—La Bonita in the Alberta Arts District and Overlook neighborhoods. Raised in Beaverton, Oregon, Joaquin attended Southern Oregon University in Ashland. At 19, he landed his first acting job as 2nd Young Man in Blood Wedding at the Oregon Shakespeare Festival where he was introduced to the poetry and drama of Garcia Lorca and subsequently becoming greatly influenced by Lorca’s work. Following in his father’s footsteps, Joaquin picked up the guitar and began writing songs. In 2003 he met flamenco player Stan Olmsted and started a musical collaboration performing the poems of Lorca. Throughout the years he’s developed his own approach to songwriting and often collaborates with different organizations and communities creating and recording songs as a group experience. Joaquin commits himself to promoting Latin American Arts and Culture and producing cultural events—Sabor a Mexico/Taste of Mexico at the Portland Art Museum, Spanish Language performances for Filmusik, and Voz Alta with Portland Latino Gay Pride. 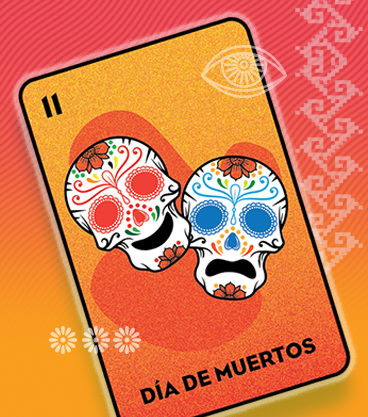