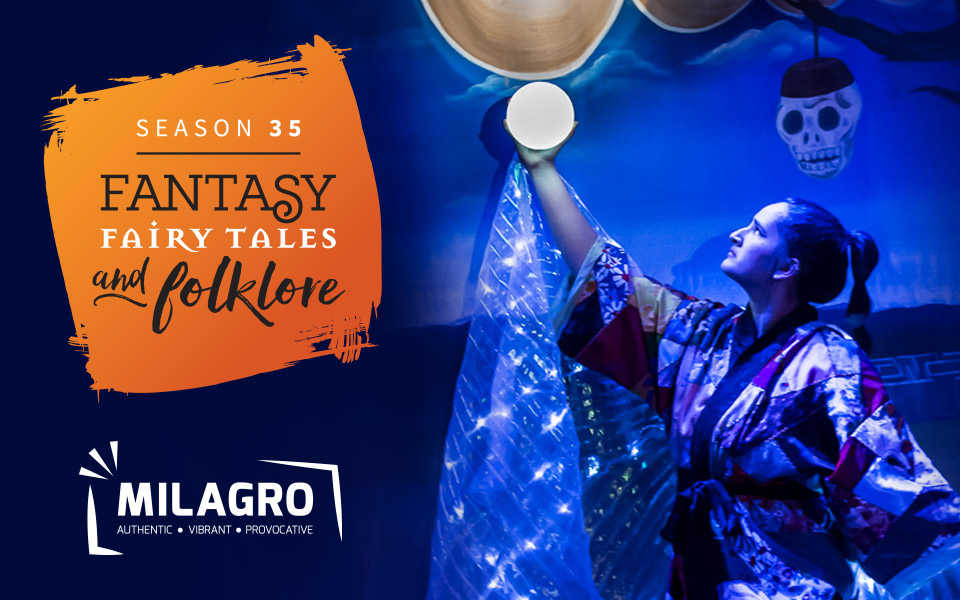 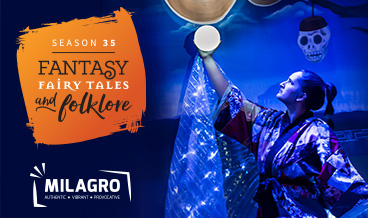 Season 35 is all about storytelling — an imaginative journey through the world of Fantasy, Fairy Tales, and Folklore. Join us as we share stories of fantastical creatures, great heroes and heroines, mystical monsters, magical beings, and spirits from another world.

Season 35 begins with Milagro’s beloved 23rd annual Día de Muertos production. This year, we take inspiration from an imaginary creature unique in Latino artwork. Alebrijes! A Día de Muertos Tale is a dream come to life, born out of one man’s dying vision.

In the New Year, Teatro Milagro will kick-off it’s National Tour with Judge Torres, about the real-life story of a #MeToo dreamer, who is serving as the most recently appointed Latina Multnomah County Judge. Our Spanish-language show takes us to Costa Rica with La Segua, where the playwright uses the legend to weave a story of superstition, jealousy, and witchcraft that tackles our societal obsession with youth and beauty. In the World Premiere of Jump, a co-production with Confrontation Theatre, a young girl she seeks solace on the edge of a bridge. But the truth of her intentions becomes all too clear. And now only one question remains: will she take the leap, or will the leap take her? We close the season with the National New Play Network Rolling World Premiere of Wolf at the Door, a grim Latino fairy tale. When wild dogs are said to carry the spirits of the dead to the other world, we hear a scratch at the door. Is it that beast of a husband who relishes abuse on women, or is it something more primal?

Get the most savings with a Flex Pass subscription.

Once upon a time, a man, Pedro Linares Lopez, falls deathly ill. In his waking fever dream, he arrives in a forest, and the landscape slowly morphs into a flurry of hybrid creatures. As he escapes their noise, they scream one word: “Alebrijes!” This year’s Día de Muertos performance brings the mysterious tale of the alebrijes to our main stage, where puppetry and mythology abound.

An immigrant. A dreamer. A survivor. This is the story of Xiomara Torres. This is the story of America. Milta Ortiz’s Judge Torres recounts the inspiring story of one Oregon’s finest judges, woven together with magical realism and Mayan folktales from her home of El Salvador. Presented as Teatro Milagro’s 2019 National Touring Production.

The legend says that on his way home, a philandering man encounters a beautiful young woman. He offers to escort her home. But as he turns, her beauty decays into horror. Fiery red eyes, a woman’s body, and a horse’s skull. La Segua's terror warns men of their inconstant ways. La Segua is a story of superstition, jealousy, and witchcraft that tackles our societal obsession with youth and beauty.

A story of one girl’s journey to understanding herself. She sits, vaping at the edge of a bridge. She is joined by a young man. And as they talk, her intention for being there becomes all too clear. And now question remains: will she take the leap, or will the leap take her?

Deep in the woods, a young wife finds the strength to stand up to her abusive husband when he forces a pregnant woman to stay in their home against her will. Meanwhile, a pack of wolves closes in on the hacienda. Now trapped inside and out, the wife must decide what price she is willing pay for their freedom.

See what Milagro staff and some of the creative minds involved have to say about the five productions in the season.