Dreaming beyond our differences
TICKETS

The Milagro familia is excited for Season 39: Bridging Divides. Season39 is all about coming to terms with our differences, affirming them and each other, and working to find, not merely a compromise, but a higher solution.  The programming that we have curated for Milagro MainStage, Teatro Milagro, Community Artes and more, all reflect our quest to consider, understand and move to action in order to make a better world.

“Soy original. The world would be pretty boring if everyone was the same.”

As a child during the Mexican Revolution, young Frida helps her mother to dress the wounds of soldiers and discovers the world of photography through her father.  With the onset of Polio, her parents keep her away from bullies and other harm in the streets, but she is so lonely.

With the help of her imagination, she discovers a world of her own, beyond the four walls of her room, where she can play and dance, and be herself.  Her imaginary friend takes her to a fiesta with all the characters of her imaginings.  There she discovers who she truly is, and sets off on her own to become the legendary artist that continues to inspire.

Every fall, the dead are commemorated in Portland’s longest-running Día de Muertos (Day of the Dead) celebration. This year, we observe our 26th Día de Muertos with an original production, ¡Viva la Muerte!.

Semillas, our newest work about CO2 founder Juan Carlos Sesma, will show how just one person can take a small idea and turn it into something that is bigger than themselves, something that can change the world that we live in and make it more sustainable.

Here at Milagro we are honored that Juan Carlos has agreed to let us share his story about his unique creation of planting seeds with drones, and also very excited to work with playwright Alicia Dogliotti from Uruguay, and Lawrence Siulagi, our master of video and sound, to create this play.

“This story I write, I write because it lives inside me.”

Based on the novel by Miguel de Cervantes

Milagro has engaged a creative team to develop and commission a Spanish language espectáculo based on Cervantes’ Aventuras de Don Quijote with a gender twist. The women, La Quijote and Sancha, inhabit an imaginative and visionary world turned upside down as they journey through regions of identity, sexual bias and politics, and much much more.

THE PLAY YOU WANT

“You saw something beautiful and took it for no other reason than it not being yours.”

The Play You Want is a comedy that explores the divide between exploitation and acceptance – Fed up by the theatre world’s desires to box him in, Mexican playwright Bernardo Cubria sarcastically pitches Nar-Cocos, a play about drug dealers on Día de los Muertos. Much to his surprise, the Public Theatre picks it up. With financial pressures mounting and a newborn at home, this is his chance at a commercial success. But when Scott Rudin offers him a Broadway run on the condition he further exploit his identity and the headlines, he must decide just how much he’s willing to compromise in order to finally be accepted.

The Play You Want was first presented by Milagro with Teatros Unidos in INGENIO Milagro 2020 as a live virtual reading. 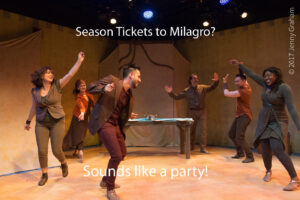 Season 39 Subscription Passes are now on sale, and you don’t want to miss these discounts or these wonderful shows! Click the link above to buy now!