Beto O’Byrne is a writer and creative artist from the pine forests of East Texas and the co-founder of Radical Evolution, a multi-ethnic, sincerely, multi-disciplinary producing collective based in Brooklyn, NY. The author of 20 plays, screenplays, and original TV pilots, his works have been produced in and developed in San Antonio, Austin, Dallas, Houston, Los Angeles, Portland, and New York City. His work has been supported by residencies at Pregones Theater, El Teatro Campesino, Stages Repertory Theatre, Florida Repertory Theatre, Tofte Lake Center, Governor’s Island, The Rough Draft Festival at LPAC, and the New Ohio Theatre, and has been supported by prominent funders such as the MAPFund, Network of Ensemble Theatres, and the Puffin Foundation.

rings to her work a lifetime of sewing and design experience. From the careful tutelage of her grandmother to her undergraduate work with Southern Oregon University, Ixel has costumed productions such as Oliver, Sweet Charity, and Once in a Blue Moon. Ixel was the head costumer for Formations Dance Company and Xdance. Most recently she costumed the Milagro Bailadores' production Carnaval and, in addition to her work on Rabbit, is costuming Teatro Milagro's Entre Dos Mundos.

was born in Guadalajara, Mexico. Raised in a bilingual household, Emma learned English and Spanish at the same time. She graduated from La Universidad Femenina de Guadalajara with a degree in business management. She became a teacher at the same university teaching English. Her first novel, A House in Los Potreros, is looking for a publisher. Her short stories in Spanish appeared in “El Cuento, Revista de Imaginacion” and “El Informador.” Her work in English appears in the web site of Latino magazine “El Andar.”

has appeared in several MTG productions including Cuentos, Latina, and Camino Confusion. She is extremely happy that her grandchildren, Angela and Gabe, have decided that they like acting.

made his acting debut with the Miracle Theatre production of The Shrunken Head of Pancho Villa. Born in east LA, Luis earned his way through college working with migrant workers picking grapes. He is currently chairman of the Hispanic Commission in the Episcopal Diocese of Oregon.

makes her first dramatic stage appearance in Roosters. Previous credits include roles in the movies "Permanent Record" and "A Bad Trip," and the musicals Working and kicks on Broadway. She has also don industrial films and commercials, most notably those for Jockey Underwear. Professionally, she is a registered nurse. 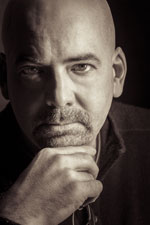 has composed music and designed sound for numerous theaters in Portland, Oregon and across the region. He received his Bachelor's Degree in Music from the University of Arizona and his Master’s degree from Manhattan School of Music where he studied piano and composition. He has recently composed music for OSF’s Tenth Muse, Denver Center’s Romeo and Juliet and Three Musketeers, ART’s Feathers and Teeth, South Coast Rep’s upcoming Monster Builder, Santa Cruz Shakespeare’s Macbeth, and A Midsummer Night’s Dream. He has also written numerous musicals for NWCT including, Snow White, Peter Pan and The Little Mermaid.

was born and raised in Fresno, California before he moved south to attend and eventually graduate from UCLA’s Theater Film and Television Department. He lives in Los Angeles while successfully and blessedly staying ever creative: acting, writing, directing, producing and most importantly, learning. This show is dedicated to his “pack” for their limitless love, patience and support. Nick thanks Miracle Theatre Group for its open arms and opportunity in this first-timer’s Portland adventure.

has performed in many Portland productions, most notably as Laura in Glass Menagerie at Willamette Repertory. She can also be seen in several local commercials and as a singing telegram messenger.

This is Steve's third Portland production, following his appearances as Owen Musser in The Foreigner and as Harry Roat in Wait Until Dark (Sylvia's)

graduated from Brandies University with her MFA in Theater Arts. Burning Patience is her third production with Miracle Theatre.

is from Costa Rica. With Teatro Milagro, he has appeared as Matilde, Mijita Fridita; Miguel, Super Ana; and Esteban, Broken Promises. He graduated with a double major in Theatre and Environmental Studies from Lewis & Clark College, where he devised Being the Touristed, Part 1: The Unspoken, which debuted as his thesis performance in 2016. He recently choreographed for Mock’s Crest production of Ruddigore, and performed in the role of Kelpie for Third Rail Repertory’s mentorship program’s production of The Skriker.

studied classical ballet for nine years, beginning at the age of 3. She attended a performing arts high school in Seattle where she also studied drama. She has performed in several plays, participated in an improvisational performance group and moved to Portland in August of 1989. She is currently studying at the Training Ground.