This program is made possible by The Oregon Community Foundation’s Creative Heights Program and the National Endowment for the Arts.

The Opening Night reception is catered by

Wine and celebration for Theatre Industry Members beginning at 6:30 PM on Thursday, May 4

A woman calls on the power of Oyá…
A boat is caught in a mysterious storm…
A young woman fights to choose her own path….
This original Spanish-language musical is inspired by the Cuban Zarzuela and Shakespeare’s The Tempest. Set on the beaches of Cuba, it tells a story of the power of love, compassion, and forgiveness.

Running time: Approximately 2 hours and 30 minutes including a 15 minute intermission

ABOUT THE DEVELOPMENT
Two years ago, inspired by an Oregon Community Foundation’s Creative Heights grant and the National Endowment for the Arts, Milagro set up to do something that hadn’t been done here before: an original Spanish-language musical. The creative team consists of some long-time collaborators: Rebecca Martinez is writing the book based on a treatment by Rodolfo Ortega, who is also music and lyric composer. Olga Sanchez, Milagro’s Artistic Director Emérita continued with the show as dramaturg. Four drafts, three readings, a translation, a national-level audition, and numerous edits later, we have gathered the entire team with artists based both in Portland and New York for rehearsals, more edits, and gearing up for opening April 28, 2017!

THOUGHTS FROM DIRECTOR, ESTEFANÍA FADUL
This is a story that is dealing with really complex political situations on a very human level. We get to follow these very real, flawed, fascinating characters through a journey with a lot of heart, heartache, community, and joy.

It’s a story about a young woman in Cuba, Yenisel. She’s part of the 20-somethings generation and has a father who has been trying to get her out of Cuba her whole life. She is caught between his desire to get her out and her own ambivalence about what she wants for herself. The story is about her coming to a point where she can take charge of her own future. A big part of her journey is meeting Javier, a Cuban-American who winds up shipwrecked on the island. What happens when these two people with very different life experiences, but bound by a common tie to Cuba, come together?

On a larger scale, the story asks ‘How does a society let go of the baggage of the past to clear a path towards a new future?’ Our story takes place in Cuba right now, April 2017, and we are exploring where the country might be headed, especially as our world is going through so many changes and there are so many changes within Cuba and for Cuba-US relations. It’s about looking to the past and trying to overcome the tensions that have built up through history to try to move forward into a brighter future.

The storyline is inspired by The Tempest, and many elements of it are still there. For example, the story starts off with a magical storm that is created to bring a boat to the island. The difference is that the storm is created by Oyá, one of the orishas of the Cuban religion of Santería. She is the orisha of the storms who controls the wind and rain, and the guardian of the cemetery, as well as the orisha of death and rebirth. With her iruke (a whip made of horse hair), she cleans away the past and brings about change. Oyá, acting through the character of Doña Teresa, is the Ariel equivalent from The Tempest. Like in The Tempest, there is a father who is being eaten away by bitterness and a desire for revenge, and a daughter who is able to reach beyond this to create the possibility for forgiveness and a new future.

Music is very important in Óye Oyá because of its prevalence in Cuban culture. Composer Rodolfo Ortega was inspired by the musical genre of the Cuban zarzuela, which was in turn inspired by the original Spanish zarzuela. When that original form came to Cuba, it was more of a traditional operetta, and then a lot of other musical rhythms and styles from the Caribbean were incorporated into it. So the Cuban zarzuela is a mix of operetta and Afro-Cuban rhythms. The music in Óye Oyá is inspired by salsa, the Cuban son, opera, musical theatre…there is some of everything!

Rodolfo Ortega is an award winning composer for film, television and theatre. Rodolfo received his Bachelor’s Degree in Music from the University of Arizona and his Master’s of Music degree from Manhattan School of Music where he studied piano and composition. He has composed music for indie films such as the The Good Lot among others. For television he has composed music for the National Public Broadcast of the documentary No Perfect Answers: The Life and Architecture of Pietro Belluschi. Rodolfo is nationally known for his work in the theatre.  He has sound designed and composed for some of the most prestigious theatre companies in the United States including The Oregon Shakespeare Festival (The Tenth Muse) and Denver Center Theatre Company (The Three Musketeers, Romeo & Juliet).  Rodolfo is also an Associate Artist with Santa Cruz Shakespeare (Hamlet, A Midsummer Night’s Dream, Much Ado About Nothing, Macbeth, Julius Caesar, Man in the Iron Mask, Henry IV, Parts I & II).  His composition for Santa Cruz Shakespeare’s Love’s Labors Lost drew high praise from the Wall Street Journal who called his music “unexpectedly haunting”.  He also collaborated with Tony Award winning director, Pam McKinnon, on Santa Cruz Shakespeare’s Othello.  Rodolfo lives in Portland, Oregon where his theatrical work has been prolific.  Since 2008, he has composed an original musical every year for Northwest Children’s Theatre including Hansel and Gretel, Snow White, Pinocchio, Peter Pan, The Little Mermaid and El Zorrito (which was published by Dramatic Publishing in 2014). For Artists Repertory Theatre he has designed and composed music for Skin of Our Teeth, The Liar, Blithe Spirit, Exiles, Miracle Worker and Intimate Apparel. For Profile Theatre Company his credits include sound design and music for The Blue Door, A Lesson Before Dying, Lips Together Teeth Apart and Master Harold and the Boys. He has recently composed the music for Aurora Theatre Company’s production of The Monster Builder (San Francisco Drama Critics Award). This season he will be composing music for South Coast Repertory Theatre. He has composed for Miracle Theater Group including their productions of Lorca in a Green Dress (Portland Drammy Award), Ardiente Paciencia and Elliot a Soldier’s Fugue. Rodolfo composed the scores for Oregon Children’s Theatre’s productions of Charlotte’s Web, Tuck Everlasting (Portland Drammy Award), BFG, Holes and Cyrano.  Additionally he composed the music for the recently published play The Illustrated Bradbury by Ray Bradbury.  For the 2000-2001 Portland theatre season, Rodolfo was awarded a Portland Drammy Award in Sound Design and Composition for an entire season of outstanding work.

Rebecca Martinez is a long-time Milagro collaborator and most recently wrote and directed Milagro’s American Sueño, which toured nationally. She has written and directed a number of new works for Milagro, including Oyá: Call the Storm, La noche eterna, and Xandu’ Ya’, among others. Now based in New York, she has worked with the One Minute Play Festival, the 52nd Street Project, FringeNYC, Hybrid Theatre Works, and on developmental works for the Lark, Cherry Lane, and Working Theater among others. Rebecca is an ensemble member of Sojourn Theatre, a Co-Curator of Working Theater’s Directors Salon, a member of the Lincoln Center Theater Directors Lab, INTAR’s Unit52 and the SDCF Observership Class. Awards include four Portland Theater Drammy Awards (Ensemble Acting: 7 Great Loves and The War Project: 9 Acts of Determination – Sojourn Theatre; and Choreography: 7 Great Loves – Sojourn Theatre and The Brother/Sister Plays – Portland Playhouse) and the Lilla Jewel Award for Women Artists. 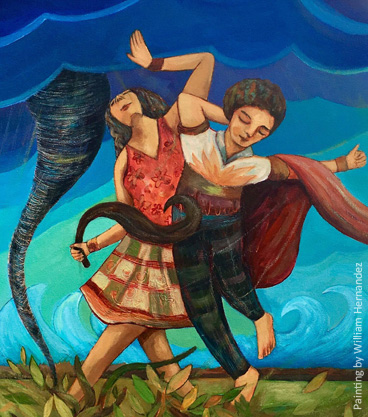