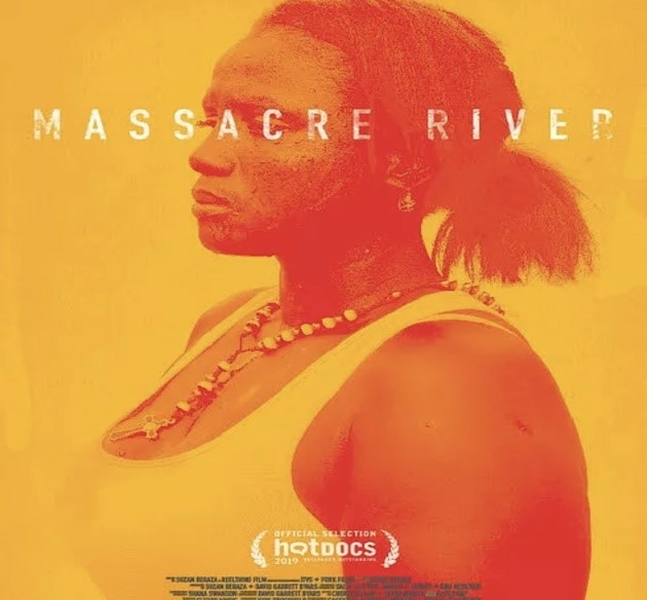 The screening and panel are free, but donations are much appreciated!

This character-driven documentary that takes place in the Dominican Republic and Haiti, two ethnically and culturally distinct countries that have been forced to share an island since colonial times.

The film follows Pikilina, a Dominican born woman of Haitian descent, and her family. Racial and political violence erupt when the country of her birth, the Dominican Republic, reverses its birthright citizenship law, and she is left stateless, along with over 200,000 others. With the stroke of a pen generations of people are left without a homeland.

This sets Pikilina on an epic journey as she struggles to regain her Dominican citizenship. Pikilina now faces the choice of fighting for her rightful citizenship and exposing herself to danger, or fleeing with her family to Haiti, a country she barely knows. In a country already rife with racism, this contentious law further stokes an atmosphere of distrust and animosity between Dominicans and Haitians, and gives tacit official support of xenophobia.

Suzan is a Hispana- Latina American and was born and raised in the Caribbean. Her films have shown on Independent Lens, PBS, Pivot TV and on the Documentary Channel, at Lincoln Center, and at many festivals. Her first film, BAG IT, was a winner of the Britdoc Impact Award in Berlin and has been televised in over thirty countries. URANIUM DRIVE-IN was a recipient of Sundance Institute and Chicken and Egg funding and was featured at Good Pitch and at Hot Docs Pitch Forum. The film was awarded the Big Sky Award, was honored for documentary excellence by the Alliance of Women Film Journalists, and was part of the American Film Showcase, an international film program of the U.S. State Department. Her most recent film MASSACRE RIVER aired on PBS in 2019 and is the recipient of ITVS funding and was selected for the Latino Media Market, Camden International Film Festival Points North Fellowship, and IFP Spotlight on Documentaries. Suzan became Festival Director for Mountainfilm festival in Telluride Colorado in 2017.

For more information on the documentary or the filmmaker, Suzan Beraza, visit http://reelthing.us/ or https://www.massacreriver.com/.

For a direct link to the trailer access the following link: https://www.youtube.com/watch?v=dF9hTUgMlrI

Ana joined the Latino Network team in the spring of 2014 working with the School Based Programs (formerly known as Family & Youth Engagement). Currently, she manages the family engagement team and coordinates the Colegio de Padres sessions. She feels blessed to be working at such a great organization that allows her to share her skills, knowledge, and life experiences with the community.

Previously, Ana worked at Chemeketa Community College in Salem as an Adjunct Instructor for Leadership Development and ABE/GED Spanish program.

She graduated from Chemeketa Community College with an AAOT and from Western Oregon University with a B.A. and a Masters in Education. She is currently completing a degree with SOU/Universidad Autonoma de Guanajuato for a MAT in Spanish Teaching.

Ana was born in Zacatecas, Mexico and also lived in Durango before moving to Los Angeles, CA as a child. Her cultural roots, traditions, and customs are well grounded as a native Mexicana.

Ana is a member of UNI@S for Oregon cohort V. In her spare time she likes to be physical active and spend time with her family.

Pedro is an interdisciplinary archaeologist and works on archaeological and anthropological studies of the Caribbean region, with a focus on the Dominican Republic and Cuba. Pedro’s research uncovers the politics of the nation-state in controlling the identity of colonized and globalized people, and the struggle of communities against dominant paradigms including colonialism, racism, classism, sexism, and globalization. Pedro’s teaching philosophy includes student centered learning, reflection and self assessment, and seeing the connection between knowledge, power and action. Pedro has worked on study abroad programs in Mexico, Spain, and the Dominican Republic and is currently focusing on Eastern Cuba. Outside of  PSU, he is a co-owner of a local organic corn masa and tortilla company, www.threesisterspdx.com.

Jaime began practicing immigration law in 2011. She has presented multiple times at conferences on topics ranging from obtaining waivers of inadmissibility to analyzing the immigration consequences of criminal convictions. Jaime has represented clients in removal proceedings in multiple states. She also represents clients before ICE, USCIS, the NVC, and consulates. Jaime also works with defense attorneys to help them analyze the immigration consequences of convictions. Jaime also has extensive experience working with clients eligible for relief under the Violence Against Women Act, including U Visas and self-petitions.

Jaime is a member of the Oregon State Bar and the American Immigration Lawyers Association (AILA). She lives in Portland and spends her spare time hiking, running, and traveling.

Lindsay is from Baltimore, Maryland and graduated Magna Cum Laude from the University of Baltimore, School of Law.  During law school, she interned for the Baltimore Immigration Court where she drafted legal opinions for the judges and was able to observe various types of removal proceedings. For her last year of law school, Lindsay moved to New York City as a visiting student at City University of New York Law School, where she worked part time at a small immigration firm in Manhattan and interned for Families for Freedom, a New York-based multi-ethnic human rights organization by and for families facing and fighting deportation.

After graduating law school in 2012, Lindsay spent her summer in Quito, Ecuador taking Spanish language courses and exploring the incredible cities and cloud forests of Ecuador. In 2013, she returned to the United States to work as an immigration attorney in Philadelphia at a firm specializing in “crimmigration” issues. At this firm, Lindsay represented clients with complicated cases due to criminal convictions before immigration courts and USCIS field offices in multiple states.

In 2015, Lindsay joined another Philadelphia immigration law firm that handled a wider variety of immigration cases including removal defense, family-based petitions and employment-based petitions.  This allowed her to broaden her practice and handle a wide-array of immigration cases.  She is now able to advise clients on a variety of matters including L-1A visas, L-1B visas, I-140 petitions, EB-1/EB-2 petitions, PERM applications, TN visas, naturalization applications, I-601A provisional waivers, adjustment with hardship waivers, SIJS, and the consequences of issues such as criminal charges or convictions, past fraud, previous denials, issuance of a RFE or NOID, among other issues.

Outside of work, she enjoys hiking with her husband and dog Hazelnut, cooking curries and soups, and writing short stories.

Lindsay is a member of the American Immigration Lawyer’s Association.

Visit https://fourcornerslaw.com/ for more information about their practice.