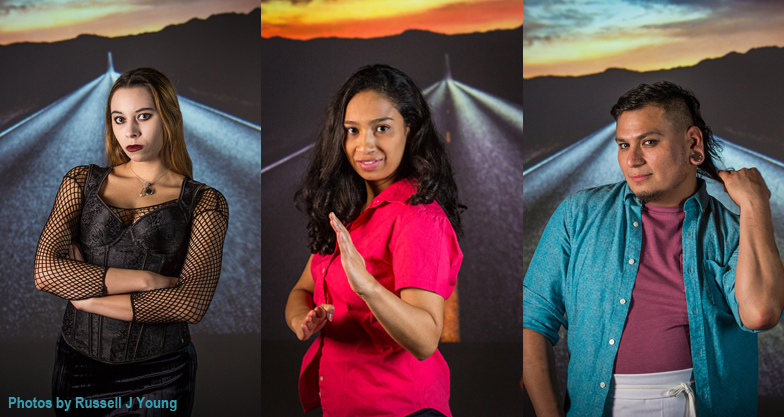 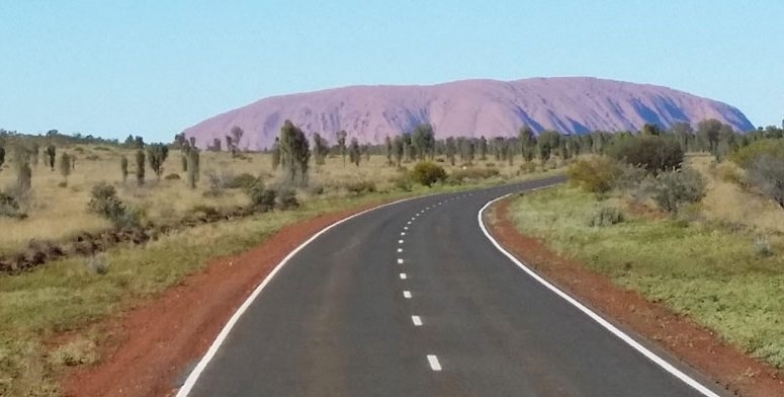 Into the Beautiful North

An Adventurous Quest
By Karen Zacarías, based on the novel by Luis Alberto Urrea
Directed by Olga Sanchez and Daniel Jáquez
A National New Play Network Rolling World Premiere | English 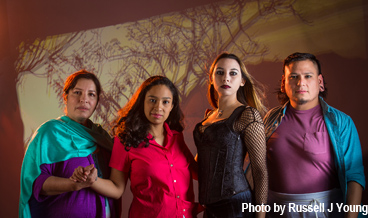 The beautiful North, and back again
-Christa Morletti McIntyre,  Oregon Artswatch, May 3, 2016

Karen Zacarias on Writing, Passion for Theatre, and the World Premiere of Her Play Into the Beautiful North, at Milagro Theatre
-Krista Garver, Broadway World, May 10, 2016

A National New Play Network Rolling World Premiere: Inspired by the classic film The Magnificent Seven, Nayeli, a young woman living in a small Mexican village and her companions venture across the border determined to bring back seven good men to protect their village from the invasion of narco-traficantes and the risk of extinction.

Into the Beautiful North Study Guide

Join us on Sunday May 8, 2016 from 4-5pm for a Talk-back with members of the Cast and Creative Team of Into the Beautiful North after the 2pm performance.

Milagro is proud to present Nayeli’s Journey, a series of post-show conversations, sponsored by Oregon Humanities. Conversations are free and open to the public and will take place immediately following the Sunday matinees.

Inspired by the everyday heroism of Nayeli and her cohorts in Milagro's adaptation and performance of Into the Beautiful North, Milagro and the Northwest Film Center are partnering together on a teen filmmaking community outreach project called HEROES MAGNIFICOS. Through the project, Latino teens from North Portland and East Multnomah County are working with Film Center faculty to learn about documentary film making and create short films about the everyday heroes in their own lives -- admired friends, family members and mentors who are making the community a better place.
There will be a free community screening of HEROES MAGNIFICOS at Milagro on Tuesday, May 24th at 6pm. Check out the TRAILER. More info available on their website.

Karen Zacarías sold-out world premiere drama Just like us (adapted from the book by Helen Thorpe) at Denver Theater Center, the Steinberg –citation award play Legacy of Light, the Francesca Primus Award winning play Mariela in the Desert, the Helen Hayes Award winning play The Sins of Sor Juana, the adaptation of Julia Alvarez’s How the Garcia Girls Lost their Accents. Karen also has a piece in the Arena Stage premiere of Our War. Her TYA musicals with composer Debbie Wicks la Puma include Jane of the Jungle, Einstein is a Dummy, Looking for Roberto Clemente, Cinderella Eats Rice and Beans, Ferdinand The Bull and Frida Libre. Her musical Chasing George Washington premiered at The Kennedy Center for Performing Arts and went on a National Tour. Her script was then adapted into a book by Scholastic with a foreword by First Lady Michelle Obama. Karen is currently working on the adaptation of Edith Wharton’s The Age of Innocence, a drama for Oregon Shakespeare Festival, and a Brazilian themed Oliver Twist musical: Oliverio: A Brazilian Twist on Dickens for the Kennedy Center. Her libretto of The Sun Also Rises for the Washington Ballet received accolades in the New York Times and she is currently writing the libretto for The Legend of Sleepy Hollow with Washington Ballet artistic Director Septime Webre. She is proud to be currently commissioned to write new plays for Arena Stage, Cincinnati Playhouse, Ford’s Theater, Adventure Theater, and First Stage.

Karen is the first playwright-in-residence at Arena Stage in Washington, DC and has taught playwriting at Georgetown University. She is the founder of Young Playwrights’ Theater, an award-winning theater company that teaches playwriting in local public schools in Washington, DC. YPT won the 2010 National Arts and Humanities Youth Program Award from the White House as one of the most innovative arts programs in the nation. The YPT curriculum is currently being used in public schools in DC, VA, MD, New Orleans, Detroit, and Texas and is published on Amazon as “WRITE TO DREAM.”

Karen is represented by the Graham Agency and published by Dramatic Publishing. Karen is fluent in English and Spanish and highly proficient in Danish and French. She has BA with distinction from Stanford University and a Masters in Creative Writing from Boston University. Born in Mexico, Karen now lives in Washington D.C. with her husband and three children.

Luis Alberto Urrea, 2005 Pulitzer Prize finalist for nonfiction and member of the Latino Literature Hall of Fame, is a prolific and acclaimed writer who uses his dual-culture life experiences to explore greater themes of love, loss and triumph.
Born in Tijuana, Mexico to a Mexican father and an American mother, Urrea has published extensively in all the major genres. The critically acclaimed and best-selling author of 13 books, Urrea has won numerous awards for his poetry, fiction and essays. The Devil’s Highway, his 2004 non-fiction account of a group of Mexican immigrants lost in the Arizona desert, won the Lannan Literary Award and was a finalist for the Pulitzer Prize and the Pacific Rim Kiriyama Prize. An historical novel, The Hummingbird’s Daughter tells the story of Teresa Urrea, sometimes known as the Saint of Cabora and the Mexican Joan of Arc. The book, which involved 20 years of research and writing, won the Kiriyama Prize in fiction and, along with The Devil’s Highway, was named a best book of the year by many publications. It has been optioned by acclaimed Mexican director Luis Mandoki for a film to star Antonio Banderas.

Urrea’s most recent novel, Into the Beautiful North, imagines a small town in Mexico where all the men have immigrated to the U.S. A group of young women, after seeing the film The Magnificent Seven, decide to follow the men North and persuade them to return to their beloved village. A national best-seller, Into the Beautiful North, earned a citation of excellence from the American Library Association Rainbow’s Project. A short story from Urrea’s collection, Six Kinds of Sky, was recently released as a stunning graphic novel by Cinco Puntos Press. Mr.Mendoza’s Paintbrush, illustrated by artist Christopher Cardinale, has already garnered rave reviews and serves as a perfect companion to Into the Beautiful North as it depicts the same village in the novel.
Into the Beautiful North, The Devil’s Highway and The Hummingbird’s Daughter have been chosen by more than 30 different cities and colleges for One Book community read programs.

Urrea has also won an Edgar award from the Mystery Writers of America for best short story (2009, “Amapola” in Phoenix Noir). His first book, Across the Wire, was named a New York Times Notable Book and won the Christopher Award. Urrea also won a 1999 American Book Award for his memoir, Nobody’s Son: Notes from an American Life and in 2000, he was voted into the Latino Literature Hall of Fame following the publication of Vatos. His book of short stories, Six Kinds of Sky, was named the 2002 small-press Book of the Year in fiction by the editors of ForeWord magazine. He has also won a Western States Book Award in poetry for The Fever of Being and was in The 1996 Best American Poetry collection. Urrea’s other titles include By the Lake of Sleeping Children, In Search of Snow, Ghost Sickness and Wandering Time.

For Milagro, she directed over 25 works including: El Quijote by Santiago García; García Lorca’s Bodas De Sangre (in the original Spanish) and Blood Wedding; Nilo Cruz’s Lorca In A Green Dress (Drammy Award, Excellence in Direction), and several world premieres including Caridad Svich’s Guapa and Rubén Sierra’s When The Blues Chase Up A Rabbit. Her devised work includes five Día de muertos shows, including ¡O Romeo! (Drammy Award, Outstanding Achievement in Devised Work). Internationally, her directorial work has been seen in Honduras, Peru, Venezuela and Cuba.

Sanchez has served for many years as a community arts organizer and art educator, including as the director of Milagro’s Latino Artists eXchange/Intercambio de artistas Latinos (LAX/IdeAL), strengthening the community of Latino artists of all disciplines. She has served youth groups and cultural organizations, including the Cesar Chavez Leadership Conference and Seattle’s Mañana Coalition. She is the creator of Posada Milagro, a community-based holiday program.

From 2007-2013, Sanchez served on the board of Theatre Communications Group (TCG) and its Diversity Task Force; currently she serves on the Steering Committee for the Latina/o Theatre Commons, a program of Howlround/Center for the Theatre Commons at Emerson College. She holds a BA, Theatre, from Hunter College, C.U.N.Y.; MA, Human Development, Pacific Oaks College NW, specialization in Bicultural Development; and begins graduate studies toward earning a Ph.D., Theatre Arts, from University of Oregon in fall, 2015.

Daniel Jáquez, currently Milagro’s Interim Artistic Director has served as Artistic Associate since 2002, and directed several productions, including his original works. In addition, he is an Associate Artist with INTAR Theatre in NYC and with Teatro V!da in Springfield, MA, as well as an Advisory Committee member for The Lark Play Development Center’s US/Mexico Playwright Exchange and Director of INTAR’s UNIT52, its acting company in training. He is the co-founder of Calpulli Mexican Dance Theatre in Queens, NY, and from 2003 to 2011 served as its Artistic Director and choreographer.
Jáquez held a four-month artistic residency at Milagro in 2001, where he directed Edwin Sanchez’ Icarus (Drammy winner, Best Director) and the Día de los Muertos show. For Milagro he has also directed Mario Vargas Llosa’s La Chunga, Emilio Carballido’s Rosalba y los Llaveros, Monica Silver’s Te Llevo en la Sangre, and his Dance for a Dollar. His collaboration with William S. Gregory on a new translation of Lope de Vega’s Fuente Ovejuna was developed and premiered at Milagro; Oregon Shakespeare Festival held a public staged reading of the script in Ashland. Also in Portland, Jáquez directed Nilo Cruz’ Two Sisters and a Piano for Artists Repertory Theatre.

In NYC, Jáquez has directed and produced shows Off and Off-Off Broadway and at renowned concert venues such as Carnegie Hall and Symphony Space. He also has directed across the United States and in Russia, Switzerland, France, and Mexico. He has worked extensively in new play development with award-winning playwrights including Migdalia Cruz, Magdalena Gomez, Mariana Carreño King, Andrea Thome, Quiara Alegria Hudes and has collaborated with composers Marios Aristopoulos, Fred Ho, Sinuhé Padilla and Ernesto Villalobos to develop new performance dance-theatre pieces. His recent translations into English include plays by award-winning Mexican playwrights David Olguín, Alejandro Ricaño and Luis Ayhllón.

Jáquez grew up in Ciudad Juárez, Chihuahua, México. He studied Actuarial Science at the Universidad Nacional Autónoma de México, earning a Bachelor of Science in Mathematics from the University of Texas and a Master of Fine Arts in Directing from the American Repertory Theater/Moscow Art Theater Institute at Harvard University. 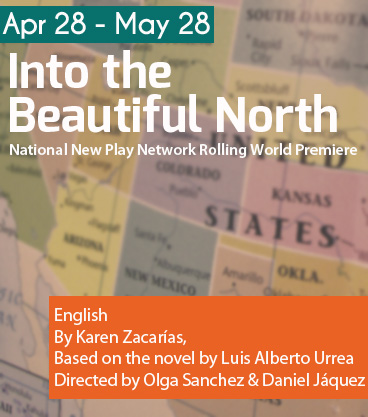 Into the Beautiful North is supported in part by:

Into the Beautiful North Opening Night reception catered by:

Into the Beautiful North Show Times