The Corrido of the San Patricios Who’s Who 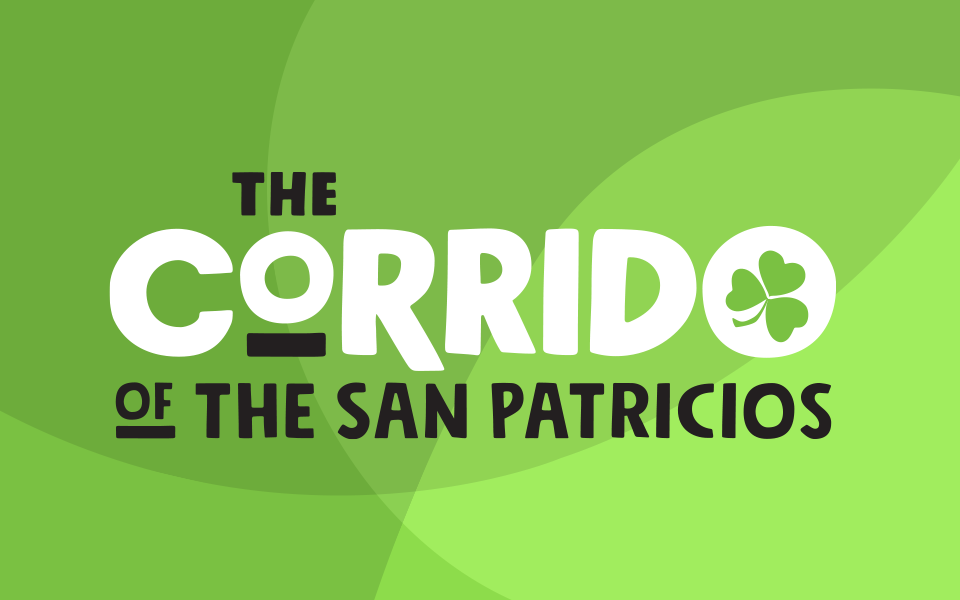 Jonathan Hernandez (Actor 1, Lochlan O’Brien) is an Arizona native—making moves, creating theater, and telling stories since 2005. His last show at Milagro was in the 2015 production of La Muerte Baila. In 2018, Jonathan encountered a wonderful opportunity to work with Radical Evolution and Teatro Campesino to workshop the play you are about to see today.

“I’ve enjoyed the process and am grateful to be working with Kinan, Beto, and Meropi once again, this time for the world premiere. I also want to say thank you to Milagro Theater for all of the opportunities you’ve given me. I appreciate being part of a community where I can express myself and hone my craft.”

Ricardo Vázquez (Actor 2, Brendan O’Connor) is excited to return to the stage for Teatro Milagro. He is a graduate of Portland State University and the recipient of the award for Broadway World’s Best Featured Actor in a Play – Portland 2019.  A few of his more recent roles include: Hector Ramirez in Amor Añejo, Polisteno in La Isla en Invierno or The Island in Winter, and Edward Weyland in Vampire Tapestry. Ricardo is also an associate artist of Original Practice Shakespeare Festival and a member of the grants and fundraising teams.

Jamie Villeda (Actor 3, Yoatl) was most recently seen in Borderline, a staged reading for the INGENIO project at Milagro. She appeared in the TV show, The Wonderland Murders, on Investigation Discovery and trained with Identity School of Acting in Los Angeles. Jamie was also chosen to participate in Cast Iron Studio’s Talent Diversity Initiative. She has performed in three other staged readings for the INGENIO Project: Blue Bullets, World Classic, and Los Dreamers. This is Jamie’s first production with Milagro and she is thrilled to be collaborating with other talented artists on the world premiere of The Corrido of the San Patricios.

Johnnie Torres (Actor 4, Patrick Mahoney) is thrilled to return to the Milagro Theatre stage after his appearance in Amor Añejo in 2019. He is a native of Los Angeles and was an actor there for several years. He attended the Lee Strasberg Acting Institute before moving to Portland in 2014. He earned a 2016 Best Supporting Actor nomination at Twilight Theater as Tony in Comfort and Joy and a 2017 nomination at Twilight as Felix in The Normal Heart. Corrido marks his 11th Portland play. Johnnie wishes to extend his sincere gratitude to the entire cast and crew and the staff of Milagro Theater.

Enrique E. Andrade (Actor 5, Capitán Flores), originally from Mexico City, is a graduate of the University of Oregon with majors in Spanish Literature and Philosophy and a minor in Political Science. Enrique became a Master Level Court Certified interpreter in July 2001 and began as a Staff Interpreter II with the OJD in December 2001. When Enrique is not interpreting in court he spends his time as a local actor on stage and screen and as Voice Over talent. Enrique has been a Milagro MainStage actor since 2006 and considers Milagro as his artistic home.

Paige Gregory (Actor 6, Santiago O’Leary) is honored and humbled to be making her Teatro Milagro debut! After growing up in Reno, Nevada, Paige graduated from Portland State University with a Bachelor of Arts in theatre. She is a professionally trained competitive dancer and musician. Paige has been lucky to have worked in and out of Portland with Lakewood Theater Company, the Funhouse Lounge, Stumptown Stages, and the Lake Tahoe Shakespeare Festival. Paige would like to thank her parents, her best friend Taryn Judah, and her partner Conor Nolan for their constant support and love.

Beto O’Byrne (Playwright) is a writer and creative artist from the pine forests of East Texas and the co-founder of Radical Evolution, a multi-ethnic, sincerely, multi-disciplinary producing collective based in Brooklyn, NY. The author of 20 plays, screenplays, and original TV pilots, his works have been produced in and developed in San Antonio, Austin, Dallas, Houston, Los Angeles, Portland, and New York City. His work has been supported by residencies at Pregones Theater, El Teatro Campesino, Stages Repertory Theatre, Florida Repertory Theatre, Tofte Lake Center, Governor’s Island, The Rough Draft Festival at LPAC, and the New Ohio Theatre, and has been supported by prominent funders such as the MAPFund, Network of Ensemble Theatres, and the Puffin Foundation.

Kinan Valdez (Director) is a 25-year ensemble member of El Teatro Campesino. Reared in the collective milieu of the famed social justice theater company founded by his father Luis Valdez, Kinan served as ETC’s Producing Artistic Director until 2017. As a director and theater-maker, Kinan explores the intersections between the mundane and the mythic by combining elements of epic storytelling, popular music and visual pageantry to create participatory theatrical spectacles. He is excited to return to Milagro after directing Lydia in the 2016-2017 season. Recent credits: La Pastorela: The Shepherd’s Play (El Teatro Campesino, 2019), Adiós Mama Carlota (2019, San Jose Stage), Valley of the Heart (2018, Center Theatre Group), La Esquinita USA (2017, Arizona Theatre Company), The River Bride (2017, Arizona Theatre Company), and Zoot Suit (2017, Center Theatre Group). Aside from his professional theater work, Kinan is an Adjunct Professor of Theater Arts at the University of California Santa Cruz and a national advisor for the Latinx Theatre Commons.

Michael Cavazos (Stage Manager) is the author of the play Gritos y Chismesitos and co-author of Chic and Sassy: The Higher the Hair, the Closer to God. He recently assistant directed Sweat by Lynn Nottage at Profile Theatre and directed and performed in the theatrical concert Universo. He has stage managed several shows including Imago’s productions of La Belle, Savage/Love, and Medea; Crave Theatre’s productions of Crossing and Red; PSU Opera’s The Breasts of Tiresias; Hand2Mouth Theatre’s Dream|Logic and Object Karaoke; and Milagro’s production of A Xmas Cuento Remix. You can hear Michael deejaying every Wednesday on opbmusic.

Anthony Forchielli (Lighting Designer) is enthused to be making his Portland debut as a lighting designer at Milagro. After starting out his career on the East coast, working in NYC, he has become a regional lighting designer, designing coast to coast for companies, including Oregon Children’s Theatre, Milagro Theatre, The Wirtz Center for the Performing Arts, The Wagon Wheel Theatre, and the Bienen School of Music. Anthony splits his time between NYC, Chicago, and Portland, Oregon.

Anthony holds a BFA and MFA from DePaul’s Theatre School Conservatory and Northwestern University respectively, and was the 2019 Gilbert Hemsley Lighting Internship recipient. Anthony’s work has been featured in the pages of PLSN & Lighting and Sound America. Please visit www.designedAF.com for samples of his work, and enjoy the show!

Sydney Dufka Forchielli (Costume Designer) is a visual storyteller and costume designer from Arch Cape, Oregon. She is interested in exploring the motivation of characters through the details in the clothing. Educated in Chicago and based on both coasts, Sydney spends her time jet setting across the continental 48 with her husband, Anthony Dufka Forchielli.

Upcoming projects include The K of D at Oregon Children’s Theatre, and The Living Life of Daughter Mira at Milagro Theatre.

Sydney holds a Bachelor of Fine Arts in Costume Design from The Theatre School at DePaul University, where she studied under Nan Cibula-Jenkins.

Emily deLorimier (Props Manager) Managing props for Milagro’s production of The Corrido of the San Patricios has been a joy and a challenge for Emily. She is a graduate of the Lewis and Clark Theater Program. She has loved the work she’s done for INGENIO and various other staged readings at Milagro, as well as her time spent filling in at concessions. She looks forward to future projects with Milagro.

Chas Croslin (Music Director, Músico) is a performer, musician, and theatre artist based in Los Angeles. Since 2006, Chas has served the iconic El Teatro Campesino as performer and/or producer of plays, pageants, and puppet spectacles. Chas is thrilled to be performing at Milagro and continuing work with Radical Evolution with the intention that revisiting stories of past injustices can help us to prevent committing others as we move forward.

Sherman Floyd (Músico) has been playing music in Milagro productions since 1997, when he was a founding member of the Milagro Bailadores. He has acted and played music for many of Milagro’s Día de Muertos productions, spring musicals, as well as many Posada Milagros over the years. A teacher by day, Sherman has studied in the US and abroad with some of Cuba and Mexico’s musical masters of Afro-Cuban and Son Jaracho styles, respectively. He currently performs Afro-Mestizo/Nuevo Son music with the band Son Huitzilín (hummingbird in Nahuatl). It is a great honor to be playing in Corrido of the San Patricios and to celebrate such diverse musical styles and influences.

Rosa Floyd (La Bailadora) is a Dual Language kindergarten teacher at Nellie Muir Elementary in Woodburn. She uses folkloric dance to instruct and inspire students, teachers and parents, as well as the entire community. She has been dancing since the age of six and performed with many Ballet folkloric groups in Guadalajara professionally for many years before moving to Portland. She has studied and traveled in Mexico, Spain and Cuba. In the Northwest, she directs and performs with Cosecha Mestiza and Grupo Huitzilin.

One of the founding members of her own Milagro Bailadores, Rosa has been performing with Milagro since 1997. Other Milagro credits include, Xandu Ya, Canta y No Llores, Alas del Huracán and La Muerte Baila. It is a true honor to be able to participate in this project with such a talented group of artists.

Meropi Peponides (Co-creator, Dramaturg) is a theater maker, artistic producer, dramaturg, podcast producer, and co-founder of Radical Evolution. She most recently co-created Songs About Trains, The Corrido of the San Patricios, and Loving and Loving. She is also one of three directors of Soho Rep in New York, where she leads artistic development and produces the mainstage season. Her work explores cross-cultural affinity and the experience of multiethnic identity in the 21st century. BA, UCLA; MFA (Theatre w/ emphasis in Dramaturgy), Columbia University (Dean’s Fellow). She is a proud member of Artists Co-Creating Real Equity (ACRE).