The man with the American dream: An interview with Ozvaldo Gonzalez 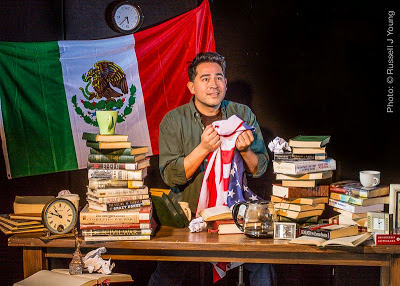 Actor Ozvaldo González returns to the Milagro stage in the title role of American Night: the Ballad of Juan José, in a performance that “underplays the character perfectly, so that you can empathize with him and identify with his plight” (Dennis Sparks).
With opening weekend under his belt, González had a moment to answer some questions from Marketing Assistant Vicente Guzman-Orozco about the play, his role and the production in general:

Vicente Guzman-Orozco: How would you describe
the play and your role?
Ozvaldo González: The play is a fantastical journey
through moments in American History that highlight some unsung heroes of our
past and shed light on the insecurities many new Americans face when going
through the process of becoming citizens in this country.  My role is that
of an honest, good hearted human being who wants nothing more than to provide
for his family in a way that keeps them safe and allows them to be contributors
to society.
VGO: In which ways do you
identify (or don’t) with Juan José?
OG: As a first generation Mexican
immigrant who helped his parents study for their citizenship tests during my
teenage years, there is a lot about me that identifies with Juan Jose.
Many of the identity issues that he faces and his interest in living out the
American dream only to find out reality is not exactly as the history
books might indicate are experiences I can relate to very directly.  Even
though I did not leave my family to make a life in Mexico, I know many
people who have done this and their experience is very present in my mind.
VGO: What has been the most
challenging part of this production?
OG: The role that Video, Sound, Lighting, and Costumes play
in this production is large and impacted our rehearsal process greatly.  It
is clear that with the increasing use of technology in theater
productions, thinking of the technical components as part of the cast is an
important step in harnessing the power of these ‘characters’ during the
creative process.   A lot can be accomplished to enhance the audience
experience using new technologies, but the way in which new technologies might
impact the creative process need to be better understood.
VGO: What’s the most rewarding
part of working on the show for you?
OG: The talented people that surround me
are an inspiration to me.  From the Playwright and Director, to
the Cast and Technical Crew; everyone is dedicated to telling this important
story in a way that shows its relevance to today and delivering it in an
entertaining manner.
Don’t miss this outrageous and irreverent roller coaster through US History. Get your tickets to American Night or volunteer to usher before the show closes on May 23!