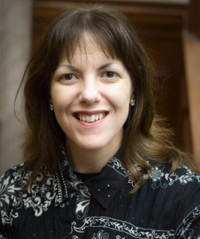 Yesterday, we introduced you to the cast of Milagro’s upcoming production of “Guapa“. Today, we’d like you to get to know the playwright, Caridad Svich …

Caridad Svich (Playwright) received a 2012 OBIE Award for Lifetime Achievement in the theatre, and the 2011 American Theatre Critics Association Primus Prize for her play The House of the Spirits, based on the novel by Isabel Allende. She has been short-listed for the PEN Award in Drama four times, including in the year 2012 for her play Magnificent Waste. In the 2012-13 season: 2012 Edgerton Foundation New Play Award round two recipient Guapa receives a rolling world premiere courtesy of NNPN at Borderlands Theater in Arizona, Miracle Theatre in Oregon and Phoenix Theater in Indiana; her 4-actor play Love in the Time of Cholera, based on the Gabriel García Marquez novel, premiered at Repertorio Espanol in NYC, where it is still running, The Tropic of X premieres at Single Carrot Theatre in Baltimore, and her play The Way of Water receives a touring UK premiere with Welsh Fargo Stage Company in Wales. There will also be regional premieres of In the Time of the Butterflies (based on the novel by Julia Álvarez) at Mixed Blood Theatre in Minneapolis, The House of the Spirits at Gala Hispanic Theatre in Washington D.C,  and academic premiere of her fantasia on 1963, Pop culture and the Kennedy assassination The Archaeology of Dreams at University of Nebraska-Omaha. Her new play Spark received 32 readings across the US and abroad, including a reading at the Cherry Lane Theatre produced by TEL and Mannatee Films under Scott Schwartz’ direction in November 2012 to honor war veterans (http://www.nopassport.org/spark).
Among her key works: 12 Ophelias, Any Place But Here, Alchemy of Desire/Dead-Man’s Blues, Iphigenia Crash Land Falls on the Neon Shell That Was Once Her Heart (a rave fable), Instructions for Breathing,and the multimedia collaboration The Booth Variations. Five of her plays radically re-imagining ancient Greek tragedies are published in the September 2012 collection Blasted Heavens (Eyecorner Press, University of Denmark). Her works are also published by TCG, Broadway Play Publishing, Playscripts, Arte Publico Press, Smith & Kraus, Alexander Street Press, and more. Among her awards/recognitions are: Harvard University Radcliffe Institute for Advanced Study Fellowship TCG/Pew Charitable Trusts National Theater Artist Residency at INTAR, NEA/TCG Playwriting Residency at the Mark Taper Theatre Forum Latino Theatre Initiative and a California Arts Council Fellowship. She has edited several books on theatre including Out of Silence: Censorship in Theatre & Performance (Eyecorner Press), Trans-Global Readings and Theatre in Crisis? (both for Manchester University Press) Divine Fire (BackStage Books), and Out of the Fringe: Contemporary Latina/o Theatre & Performance (TCG), and Conducting a Life: Reflections on the Theatre of Maria Irene Fornes (Smith & Kraus). Her translations of Federico García Lorca’s plays are collected in Lorca: Six Major Plays (NoPassport Press) and Impossible Theatre (Smith & Kraus). She has also translated works by Julio Cortazar, Lope de Vega, Calderón de la Barca, Antonio Buero Vallejo and contemporary plays from Mexico, Cuba, Serbia and Catalonia. She is alumna playwright of New Dramatists, founder of NoPassport theatre alliance & press (http://www.nopassport.org), Drama Editor of Asymptote journal of literary translation, associate editor of Routledge/UK’s Contemporary Theatre Review and contributing editor of TheatreForum. She is affiliated artist of the Lark Play Development Center, Woodshed Collective, New Georges, and a Lifetime member of Ensemble Studio Theatre. She holds an MFA in Theatre from UCSD, and she trained for four consecutive years with Maria Irene Fornes at INTAR. She has taught playwriting at Bard College, Barnard College, Bennington College, Einhorn School of the Arts at Primary Stages, OSU, Rutgers University-New Brunswick, ScriptWorks, UCSD, and Yale School of Drama. She is an entry in the Oxford Encyclopedia of Latino Literature. Website: http://www.caridadsvich.com