Feet, what do I need you for when I have wings to fly - Frida Kahlo
Written by Ajai Terrazas Tripathi & Directed by Dañel Malán
Northwest Premiere 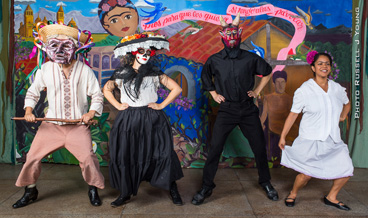 Special Events:
Conversation with the cast and members of the creative team immediately following the 2PM matinee, and a free portrait drawing workshop to follow in the cafe.

Against the backdrop of the Mexican Revolution, young Fridita, growing up in her family’s blue house in Coyoacan is diagnosed with polio. Bedridden, Fridita escapes into the world of her imagination, meets another girl that looks just like her, and together they journey to the center of the world for a fiesta with all the characters of her imaginings. Back in the real world, her peers taunt her for being different, but her father Guillermo encourages her, and awakens her interest in art with his love of photography. Strong and resilient, Fridita learns to overcome hardships and stay true to herself in order to become the legendary artist that continues to inspire.

Dañel Malán, co-founded the Milagro Theatre with her husband, Jose Eduardo Gonzalez and in 1989 she created the bilingual touring program, Teatro Milagro. Ms. Malán researches and develops script ideas and works with playwrights, directors, composers and choreographers. She has also written several bilingual scripts, including Cuéntame Coyote (2005, 2014), FRIDA, un retablo (2006, 2013) and Mi Vida Gitana (2006) which was recently produced at the Reno Little Theatre in Nevada.  She has shared her curricular work and bilingual education techniques as a guest instructor and workshop leader at various workshops around the country.   Malán also co-founded OYE, Opciónes Y Educación, a Latino sexual health coalition with Multnomah County Health Dept. Malán holds an MS in Education, with a  focus in Curriculum and Instruction from Portland State University. 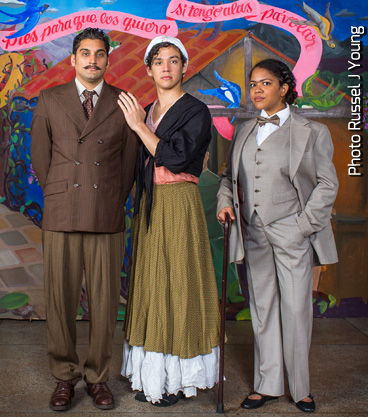