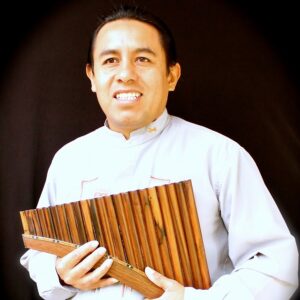 In his workshop, Alex Llumiquinca will teach you to create, decorate, and play your very own bamboo flute.
Workshops take about an hour and will include making, decorating, and learning to play the flute.
Age level: Best for adults and students fourth grade and up.
The class is $15 and all materials are provided.

Alex Llumiquinga has played Andean Folk Music for the last 25 years of his life. He was inspired as a boy by his grandfather and the popular Andean folk groups of his native country, Ecuador. After coming to the US, he had continued performing and sharing his music with the diverse population of this part of the country. He later traveled the world sharing his music as part of the music group Chayag Andean Folk Music and Dance. Chayag means, “to arrive” in Quichua, the indigenous language of the Incas. Chayag was founded in Quito, Ecuador. They bring the sounds and dances of Latin America to life as they play and share the stories and traditions of the people and culture from whom they come. Through folkloric music, they hope to inspire interest and concern for those beyond their borders and provide audiences with new insights on Latin America. They offer workshops in dance as well as flute making.

Space is limited so reserve your spot soon. Contact Estela Robinson at estela@milagro.org with questions.