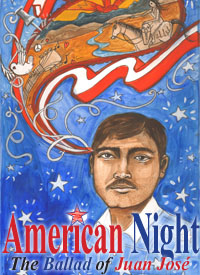 As Juan José feverishly studies for his citizenship exam, his obsession to pass takes him on a fantastical odyssey through U.S. history guided by a handful of unsung citizens who made courageous choices in some of the country’s toughest times. American Night: The Ballad of Juan José is a provocative, irreverent, and hilarious mix of past and present, stereotype and truth 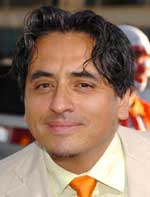 Richard Montoya is a playwright, actor, and co-founder of the collective performance trio, Culture Clash which was formed in 1984 in San Francisco. Montoya is the son of well-known artist, poet, and activist José Montoya, a co-founder of the Chicano artistic collective known as the Royal Chicano Air Force. While growing up, Montoya witnessed his family’s involvement in the civil rights movement and the United Farm Workers movement as artist activists. Richard Montoya continues that legacy through his career as a playwright and actor. Through comedy and satire, Montoya’s writings relate real-life experiences of everyday people as they confront racism, discrimination, and the difficulties and dangers of living in the margins of American society and on the Mexico-U.S. border. He has co-authored several important works for the national stage and several published anthologies of plays. Among others, he has authored commissioned works for the Oregon Shakespeare Festival, Arena Stage, the Mark Taper Forum, Yale Repertory, Huntington Theater, Berkeley Rep, the South Coast Repertory and the San Diego Repertory Theater. As a solo writer he has created Water & Power, Palestine New Mexico, Anthems, American Night and The River. Montoya is an alumni of Luis Valdez’ Teatro Campesino and of the Sundance Institute’s Writers and Directors Lab, as well as a two-time Annenberg Fellow. 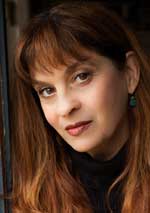 Elizabeth Huffman returns to Milagro Theatre for the second time, having directed the award winning Oedipus El Rey for the company in 2012. Recent productions in Portland were her play Bon Ton Roulet at the Shakespeare Cafe at Post 5, for Northwest Classical Theatre Company: The Lion in Winter, King John and the upcoming Mary Stuart; November for Jane, A Theatre Company, Antony and Cleopatra  for Portland Actors Ensemble, andOedipus the King and Trojan Women for Classic Greek Theatre of Oregon. Elizabeth is also an actress, a costume designer and a teacher. For more information on her work, visit her website at www.elizabethhuffman.com