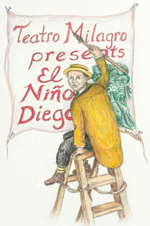 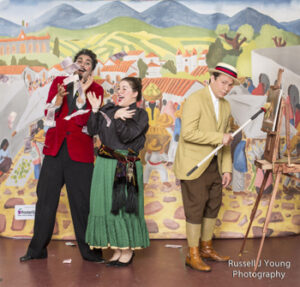 Teatro Milagro kicks off its 30th season of bilingual touring productions with a new show about the young Diego Rivera. Fans of the most recent production of, Frida un Retablo, will be charmed by, El Niño Diego, a play that is geared for middle school audiences. With the same cast of actors and interchangeable scenery, El Niño Diego can perform in the same school, along with the current elementary grade production of Aventuras de Don Quixote, a great combination for K – 8 schools!Both plays are accompanied by the Aventuras literature workshops with new projects for middle school students.

It’s 1913 as young Diego navigates the balance between his responsibilities for his education, and his desire to create art. Dreams and reality collide when the Aztec Goddess, Coatlicue, bequeaths Diego with a magic paintbrush. Diego learns very quickly that with great power, comes great responsibility as El Director and La Profesora try to use Diego’s gifts and eagerness to help his community, for their own selfish gain. Filled with humor while asking important questions about la vida, audiences will love the accessibility to Diego Rivera.

El Niño Diego follows the real life story of Diego Rivera as a boy, sent to live with a curandera because of his poor health. As a child prodigy, his parents enrolled him into an art school at an early age. Here facts become fiction, while Director Manguino was the school director, he was not greedy. Although later in life, the real Diego Rivera did return to the school as an adult and participated in its overthrow of European idealism and created a new school that reflected the art of the people, all without the help of a magical paintbrush.

El Niño Diego is complemented by a series of AVENTURAS workshops that can be either pre or post show, or presented as a stand-alone activity. These AVENTURAS workshops are themed around bilingual Latino children’s literature and follow with projects related to the stories, such as mask-making and myth writing after hearing a story about Mayan mythology. All of the fun and exciting arts and theatre projects are compiled in a booklet in PDF format that is available to educators at participating schools.

El Niño Diego is a forty minute, 4-person show that can be presented in any large space. Single performances are $700 plus travel expenses. Back-to –back performances for schools with more than 200 students are $1200. AVENTURAS workshops are $100 – 200 per hour depending on the number of classes per session. For more details, or to arrange a performance for your school, library or community group, contact Milagro at 503-236-7253 or touring@milagro.org.